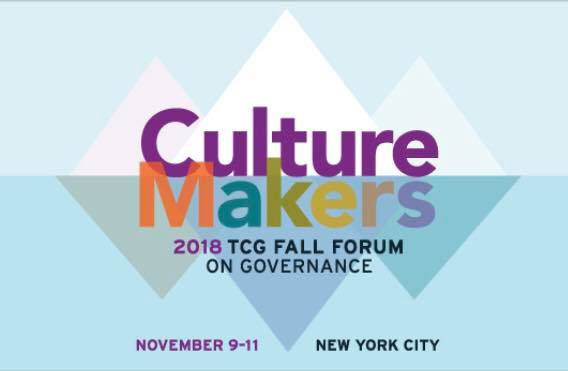 Trustus Theatre has been a member of Theatre Communications Group for over a decade now. TCG is a nonprofit service organization headquartered in New York City that promotes and networks professional nonprofit theatres in the United States (check out their website: www.tcg.org). This year, Trustus is endeavoring to maximize our membership opportunities by attending TCG events as well as applying for grants offered by the group. So, last weekend, I packed my Rick Steves backpack with enough clothes for a fall weekend in NYC and boarded a northbound plane in Charlotte (thanks to Matthew DeGuire and Randy Moore at Travel Unlimited for sponsoring my travel). I was on my way to attend the 2018 TCG Fall Forum on Culture Makers and Governance.

I’ve been on staff at Trustus since 2007, and this was the first time that a member of the theatre’s administration was present at one of TCG’s conferences in that time. The conference began on Saturday morning with a First-Timer’s breakfast, which was absolutely lovely. I sat at a table with Mac Thompson and Robbie Tindall (board member and director from The Actors Theatre of Louisville), playwright Larissa FastHorse (her show The Thanksgiving Play is currently running at Playwrights’ Horizons), Erik Schroeder (Artistic Director of The House Theatre of Chicago), and members of the TCG Forum staff. After an hour of great conversation, I knew that I was surrounded by people who love theatre, who create it yearlong, and who respect the opportunity for theatres to not only represent their community, but to steward their communities forward by welcoming them to learn about the human experience by looking through lenses that differ greatly from their own.

While it’s impossible to pack the entire weekend’s wealth of experience and knowledge into one blog post, I can say that the ever-present exploration featured approaches for making cultural changes within organizations that could have the power to make change in an organization’s community.

Laura Freebairn-Smith, from Organization Performance Group, asked us to understand that at the moment an organization is created, a culture is created. The question is, over time, how do we change the culture at our theatres? How do we change the world? The answer could possibly lie in giving ourselves permission to do something radical, and utilizing micro-levers to make meaningful changes that create transformations at a holistic level. (She also quoted her psychologist who said “An expectation is a resentment under construction” – I found that to be profound.)

Tim Cynova, the Chief Operating Officer at Fractured Atlas, touted the importance of inventive workplace structures and policies. Cynova sang the praises of organizations that expect their staff to work remotely, which ultimately allows them to work during their most productive hours each day – this leads to engagement and efficiency. He touted the importance of trust in a work environment. The end goal is an engaged workforce. “Engaged employees are those with passion and who feel a profound connection to their company,” says Cynova. “They drive innovation and move the organization forward.” [Check out a blog from Cynova called “Work Shouldn’t Suck” here: https://blog.fracturedatlas.org/work-shouldnt-suck-def3d44556d7]

Harold Steward (Managing Director of The Theatre Offensive -Boston, MA) and Ashley Walden Davis (Managing Director of Alternate Roots – Austell, GA) shared how their organizations saw cultural shifts by “leaning into complexity rather than avoiding it for comfort’s sake” and reiterating that theatre’s have unique staffing needs and that “equitable doesn’t equal sameness.” (Much of their session was focused on lessons learned from Emergent Strategy, a book by adrienne maree brown. I ordered a copy and am devouring it. Yes, it’s on Amazon).

Sulu LeoNimm and Katy Rubin from Theatre of the Oppressed NYC led exercises where we examined scenarios where major donors or other stake-holders may not meet kindly with cultural-vision changes and how to meet those challenges with openness, patience, and information. [It should be noted that your humble narrator participated in an improv where I assumed the character of a new Artistic Director who was trying to engage a high-rolling donor named Larry to invest in a cultural change of introducing each board member with their pronouns. Larry did not like this idea. I became a bit defensive with him because he was being incredibly inconsiderate and unwelcoming to our new board member who identified as them, they, theirs. He refused to be moved towards a 21st Century ideal of respect. I secretly hoped Larry would take to the seas in the yacht he so dearly loved, and never return. I felt this was the moment that much of the TCG staff and other participants remembered my name for the duration of the conference.]

Playwright Larissa FastHorse and Tony-nominated director Moritz von Stuelpnagel discussed the power of satire in theatre, and how using this style of comedy can effectively create social commentary and criticism by presenting these ideas in a way that audiences seem to find more digestible.

David Schmitz and Meghan Pressman, Managing Directors of Steppenwolf (Chicago, IL) and Woolly Mammoth (Washington DC) respectively, discussed how fiscal data can paint pictures of organizational and fieldwide culture. They presented examples of how individual organizations must look at their earned and contributed incomes, and how the best practices in assessing the fiscal needs of the theatre depend on the theatre itself and its respective community. There’s no one-size fits all approach.

There were plenty of great conversations with other theatre makers in our country over the course of the weekend. In the end, the repeated thread was the ability of theatres to create culture within their walls that can in turn affect the communities they serve.

It just so happens that this conference was even more timely for me due to Trustus’ recent implementation of The Chicago Theatre Standards and the use of The Pillars of Intimacy provided by Intimacy Directors International. The hope is that these standards and pillars will allow us to create safe and responsible spaces for dangerous work. We haven’t made publicity attempts in regards to these changes because we wanted to hold ourselves accountable for their implementation and adoption in the early stages. However, I learned that it’s also important for our community to hold us accountable while we undergo cultural changes – so be rest assured we’ll be telling you more about these processes as we move forward.

I should also mention that I was able to see five plays in four days, and got to catch up with Trustus family who are now living in New York. All in all, it was incredibly enriching weekend. I’m thankful to the Board of Directors for supporting this professional development opportunity, and to Travel Unlimited for the sponsored airfare (where every plane departed on time, and arrived early).

Keep your eyes on us folks. We’ve got a lot of great things in the works within these walls. I can’t wait for you to bear witness to what lies ahead.