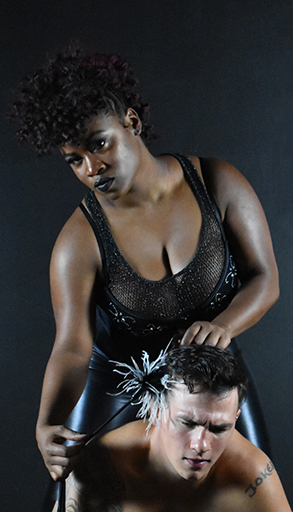 Trustus Theatre brings Sex on Sunday by Chisa Hutchison to the Cohn Side Door Theatre under the direction of Eric Bulltman. this July. Showing from July 7 – July 15, 2017,Sex on Sunday is a socially probing comedy about a dominatrix that is trying to fit in with her extremely conservative uptown neighbors. Tickets may be purchased at www.trustus.org, or by calling the Trustus Box Office at (803) 254-9732. This play is suggested for mature audiences only.
Sex on Sunday explores how we deal with our desires, fetishes, taboos, and the world around us that may not understand. When Laila moves into a new place uptown, surrounded by conservative, nosey, and catty neighbors, she has to work a little harder than most to fit in. Laila is trying her best to make new connections while keeping her business private – which becomes increasingly difficult when she starts dating a submissive, and her neighbors start looking closer into her career. Laila’s life becomes even more difficult when the husband of one of those neighbors becomes obsessed with Laila and blackmails her into offering him her service. Sex on Sunday masterfully challenges taboos on sex, race, relationships, and gender bias leaving everyone involved begging for more.

Chisa Hutchinson’s work will make its South Carolina premiere with Trustus’ production of Sex on Sunday. Chisa has been receiving a lot of attention in the NYC theatre scene. This summer her most recent play, Somebody’s Daughter, premiered and received an extended run at Off-Broadway’s Second Stage Theatre; the theatre that was responsible for 2017 Tony Award Winner for Best Musical Dear Evan Hansen. As a four-year member of the New Dramatists, Chisa has received many awards for her writing including the Lanford Wilson award.

Trustus Artistic Director Chad Henderson was excited to bring this work by Chisa Hutchison to the Cohn Side Door Theatre. “Sex on Sunday is incredibly funny, and devilishly enticing as a piece of theatre,” said Henderson. “Chisa Hutchinson is a new voice in the American Theatre, and she is getting a lot of attention these days. Trustus continually strives to bring exciting contemporary works to the Capital City so that our patrons can see it here first. Sex on Sunday delves into social expectations, the masks we wear in the public, and the lives we live in private – all rather universal explorations that audiences can relate to. In a time when we’re extremely connected and willing to share our lives and experiences through social media and other platforms, this play is interesting to me because it examines an aspect of the human experience that society often expects us to keep private or locked away: our sexuality. Through the journey of these characters, we get to see how our private lives can become complicated once privacy begins to thin and our true selves are laid bare – no pun intended. This will be an incredibly fun piece for audiences this summer, and an especially tantalizing date night.”